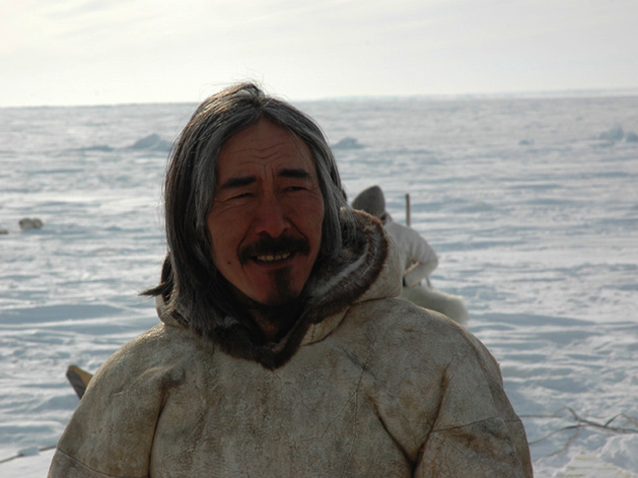 Shooting a film inside an igloo poses some unique problems. Movie cameras are delicate pieces of equipment. They need to be kept dry, secure, and at a constant temperature.

Camera Assistant Felix Lajeunesse is spending a lot of time on these problems. He tells me that on Thursday night, the camera was stored overnight in the Igloo Snow Palace. In the morning, there was a layer of ice in front of the lens, and the camera took 2 hours to warm up. On Friday night, it was stored in the catering tent that's been pitched near the Ice Palace; a gas stove burns all night there. It was better in the morning; only an hour to warm up this time. An ideal solution has yet to be found.

There are advantages to igloo shooting, though. Richard Lavoie says his sound recording equipment is unaffected by the temperatures - in fact, an igloo is ideal for his work, as all its surfaces act as absorbent acoustic pads. "It's perfect," he says. "The sound is very clear, and there's no echo. You can't do better than this." (Richard is in good spirits today; he is celebrating the fact that he's still alive, because he narrowly avoided a fatal accident on the way to the Snow Palace. He fell off his skidoo, and only escaped being brained by the qamutik (sled) behind him because his sound assistant Brian Nutarariaq kept holding onto his leg!

Once we're all set up, Saturday is spent shooting a long speech by the shaman Aua (Pakak Innukshuk). Pakak played the older brother Amaqjuaq in Atanarjuat, and he brings the same combination of strength, dignity and honesty to this role. He talks softly, but with enormous conviction; I would believe anything he told me. He's an ideal casting choice for the great shaman.

As in Captain Comer's cabin, this scene is being filmed entirely without electric lights, using only natural illumination. But the light in an igloo is very different to that in the cabin. Today, it's clean and bright - somewhere between white, grey and blue - and it's picked up by the white furs that the actors are wearing, as well as the clouds of breath that come out of their mouths. Against all that whiteness, Pakaks' dark eyes become powerful points of focus as he speaks.

The challenge of this scene is that Aua's speech is a very substantial monologue, telling his life story, and the film-makers want to capture it all in a single take. Pakak rises to the challenge, delivering the speech many times during the day as Zach and Norman get many takes from different angles, shooting it both from a tripod and hand-held. Each time, even though I don't understand the Inuktitut, it's compelling to watch.

In a break, Zach carves slices from one of the fish on the set, in Aua's food store. "He's eating the set," observes Norman. "That's a headline for you: Director Eats Set!" But as Zach passes round pieces of Arctic char, I have to admit, the set is delicious.

Pakak's scene is complete by mid-afternoon: several pages of script have been shot in a day. I am impressed at the speed of work; with no time wasted in setting up and changing lights and so on, most of the hours on set are spent filming the actors perform. Perhaps this is something like the ideal that the authors of Dogme95 had in mind: strip away the unnecessary artifice of cinema, and get down to capturing truth on camera.